Electric bicycles are becoming more and more common on the streets. The technology that goes into them has never been as cheap or as accessible. They’ve become popular with commuters, leisure cyclists, and even roadies and mountain bikers.

The number of e-bikes is rising worldwide as an answer to people becoming more focused on their health and fitness, but also the environment. People in urban areas are now willing to ditch their cars and replace them with an e-bike, which was not the case just a few years ago.

In this guide to electric bicycles, you’ll be able to learn interesting and up-to-date stats and facts about:

Contrary to popular belief, electric bikes are not a new thing. Even though they have become popular and widely available only in the last two decades, the concept of an e-bike has been known for more than 120 years. 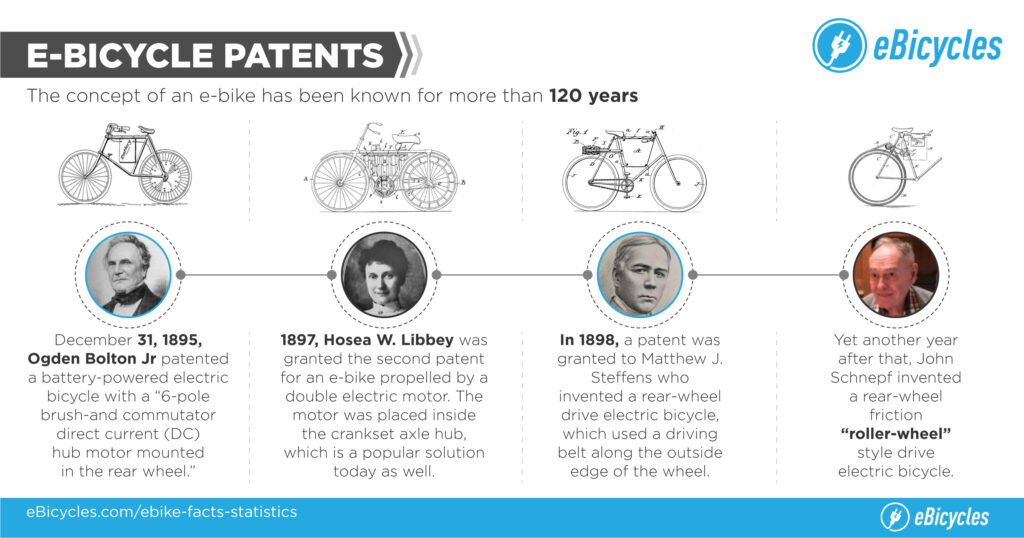 Quite surprisingly, the first patent for an e-bike was granted in 1895, well over a century ago! A few other e-bike-related breakthroughs followed before the end of the 19th century.

Even though these electric bicycle concepts and inventions were rudimental, they created a starting point. Future inventors to refine them and make them readily available for consumers. The story behind e-bikes was put on hold for almost a century until big companies became interested in electric bicycles again in the 1990s. 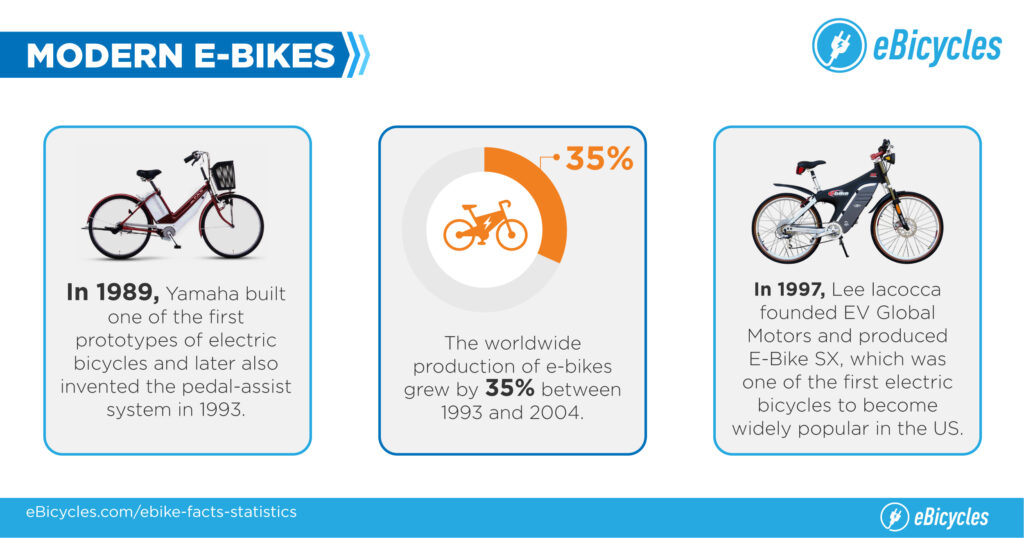 The E-Bike Market Continues to Grow

The electric bicycle market has never stopped growing, ever since e-bikes first gained popularity in the 1990s and early 2000s. By 2007, e-bikes were estimated to make up 10 to 20% of all two-wheeled vehicles in Chinese cities. Today those numbers are even higher everywhere around the world. 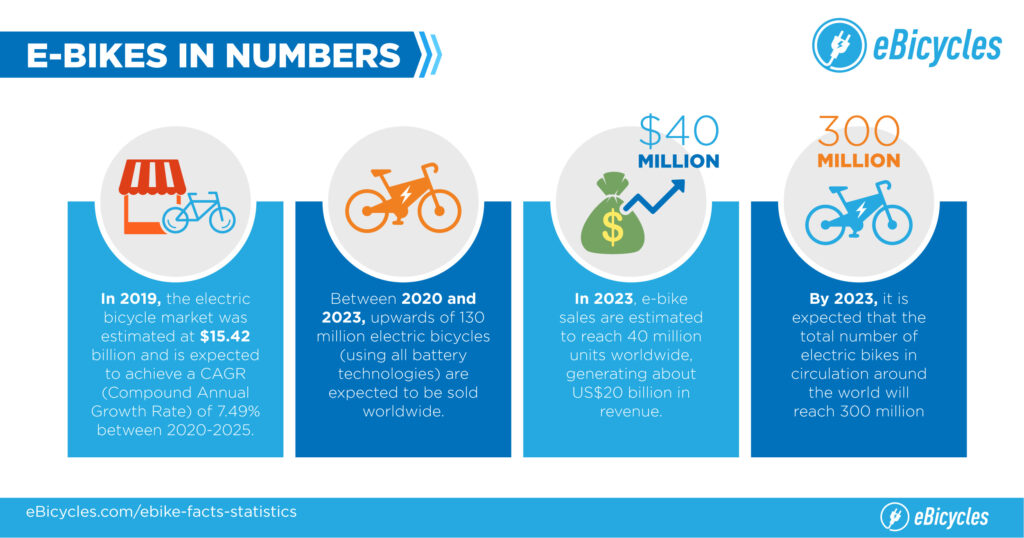 The global electric bicycle market is expected to skyrocket in the following decade, achieving massive growth in Europe, Asia, and North America.

The growing number of global sales means that there are going to be more and more e-bikes on the streets worldwide. Therefore, by 2023, it is expected that the total number of electric bikes in circulation around the world will reach 300 million. That is a 50 percent increase compared to 2019’s 200 million.

China Is Leading the Front

Of all the regions in the world, China is leading the pack when it comes to the annual and total numbers of manufactured e-bikes, sold e-bikes, and the number of e-bikes on the streets.

The production cost of lead-acid batteries is much lower compared to Li-ion. That is how China is staying competitive, as most e-bikes sold in North America and Europe are equipped with Li-ion batteries.

How Is China Staying Competitive?

Electric bicycles are more accessible in China because they are equipped with lead-acid batteries, which are cheaper than other types, bringing the final price of the e-bike down.

By using lead-acid batteries, an electric bicycle costs $167 in China on average. In comparison, e-bikes cost on average $815 in North America, and those in Western Europe cost an average of $1,546, according to Pike Research.

The number of electric bicycles is rising in Europe as well. The leading countries include Germany, France, and Italy. But the trends can be seen elsewhere as well, such as in the Netherlands, Denmark, and the other Scandinavian countries. 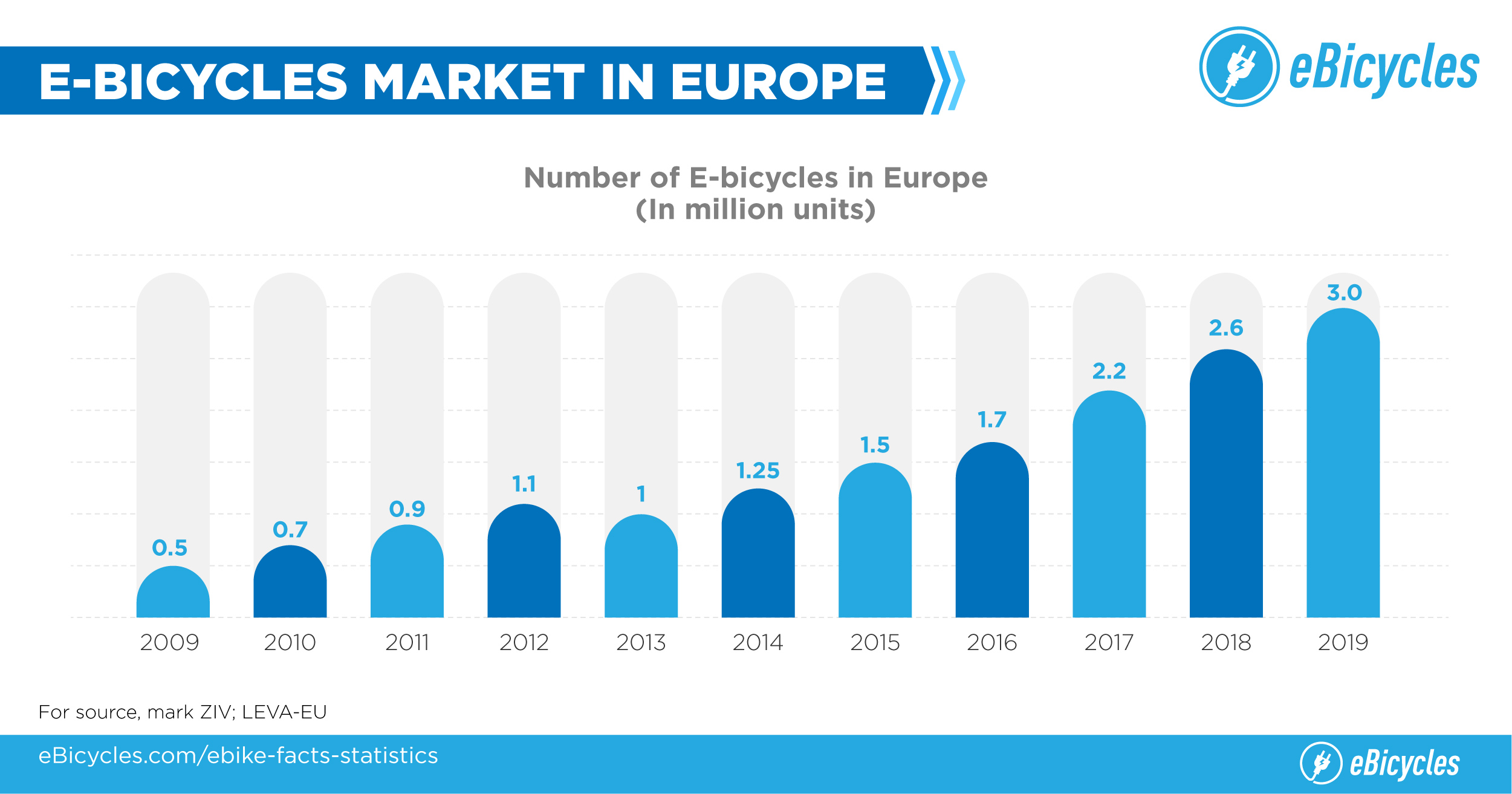 E-Bike Numbers on the Rise in All of Europe

Even though Germany is the European leader when it comes to the annual number of e-bikes sold, other European countries are following along. 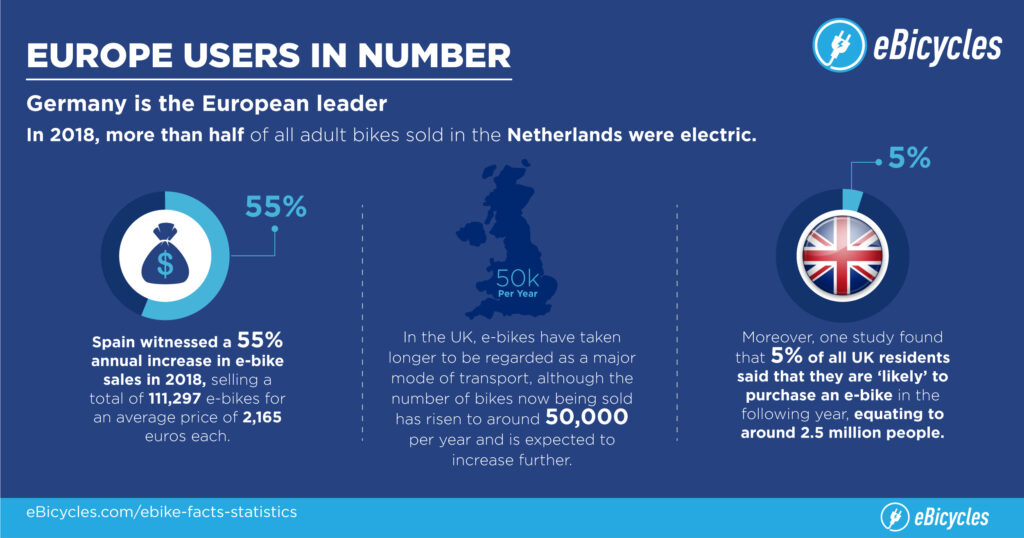 Germany is the European leader in the number of e-bikes on the street, but the Netherlands and Denmark are close behind.

More and More Electric Bicycles on the US Streets

Of all the global markets (except for Africa), the USA was the slowest to accept the electric bicycle as a viable means of transportation. Even today, the USA is considered to have a medium growth rate, which is much lower than the European and Asia-Pacific regions.

The global electric bicycle market is fragmented, without a clear leader in the industry. Still, the most influential companies are Giant, Merida, Trek, Riese & Muller, and M1 Sporttechnik.

Nonetheless, the USA is picking up the pace and seeing higher and higher growths every year.

The Electric Bicycle Market Is Fragmented

That means that the market is not dominated by a few major players who have a monopoly over the manufacturing and the sales of the product. Instead, the market is highly competitive without any dominant players.

That said, there are still a few major players that lead the pack and make more sales than others. The biggest ones are Giant Bicycles, Merida, Trek Bikes, Riese & Muller, and M1 Sporttechnik.

In the future, however, Giant Bicycles is expected to become the most dominant player in the e-bike market. The company is located in Taiwan, which gives it easy access to China and the rest of the Asia-Pacific region. These are the biggest global e-bike markets at the moment.

But, Why Do People Use Electric Bicycles?

People around the world love riding electric bicycles for very different reasons. Some struggle with injuries that e-bikes help them overcome, some need the pedal-assist system due to old age, and others simply don’t want to work too hard when cycling. 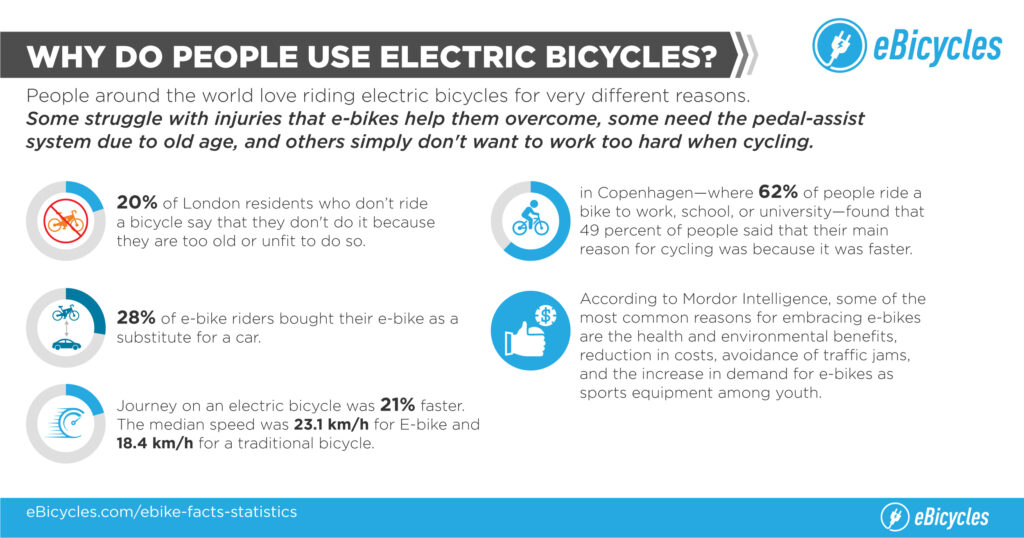 People use electric bicycles for different reasons, the biggest ones of which are related to speed, fitness, money, and the environment.

A Wealth of Reasons

Numerous studies, research, and surveys conducted around the world show that people in different countries have similar reasons for purchasing and riding e-bikes. They allow them to commute faster and with less effort, as well as continue riding well into old age. 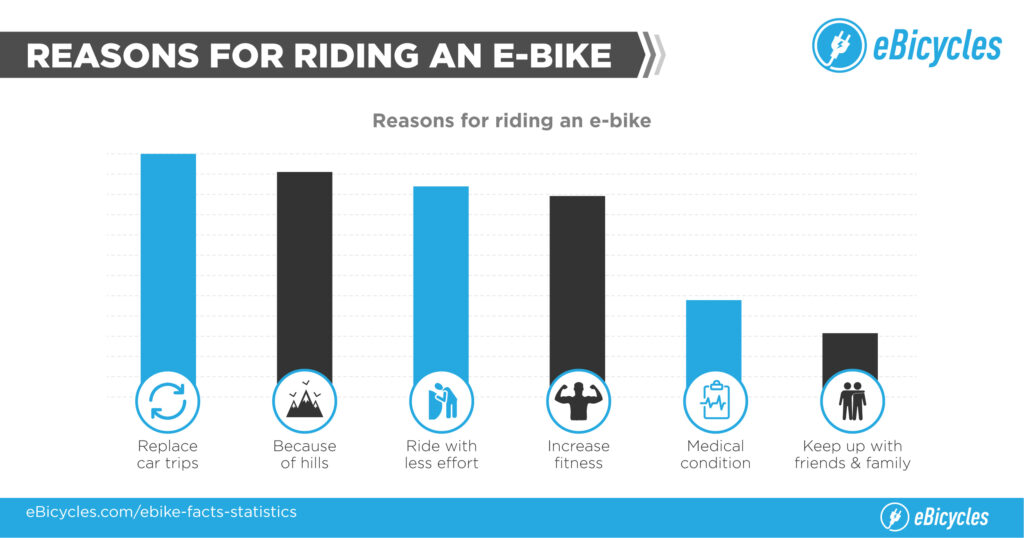 Major reasons for riding electric bicycles include replacing a car, riding over hills, saving energy, improving fitness and health, and spending time with friends and family.

Companies Are Jumping on the Bandwagon

The reasons for adopting electric bikes are not strong only for individuals—companies have numerous reasons to electrify their fleet as well. Delivery and courier services are turning to e-bikes more often than ever before because they allow them to cut costs, reduce delivery times, and receive better reviews from customers.

E-bikes are expected to become the preferred vehicle for making deliveries in big cities. That’s not just in crowded European cities, but in the United States as well.

Bikesharing Programs Are Getting Electrified

Bikesharing programs are a growing trend in big cities around the world. However, they are not always successful because of the impracticality of traditional shared bikes—they’re big, slow, and heavy.

More and more cities are adding electric bikes to their bikesharing fleets and seeing great responses from users and surges in the number of rides. More people want to use shared bikes instead of cars if they have the pedal-assist feature to help them out when they get tired.

E-bikes are built with batteries that use different chemical compositions to store power and increase the power provided by the rider. The most common types are: 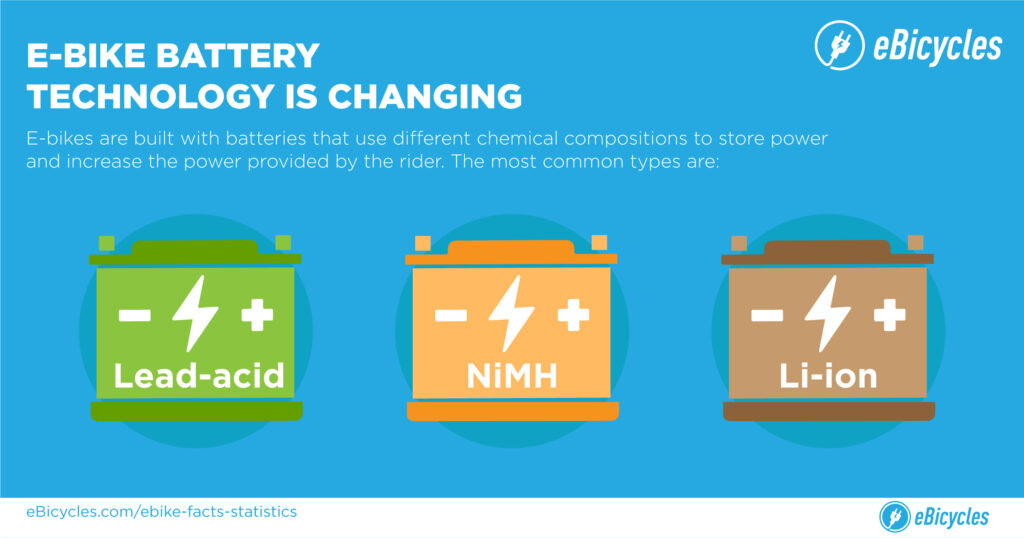 The three most common types of batteries in the e-bike industry are lead-acid, NiMH, and Li-ion. In recent years, most manufacturers use Li-ion batteries almost exclusively.

One of the reasons that China has seen such a major surge in e-bike sales is that the production costs have been much lower than elsewhere. According to INSG, this was partly achieved through the usage of cheaper and heavier lead-acid batteries. However, the trends have recently been shifting in favor of more refined lithium-ion batteries (LIB).

Prices of Li-Ion Batteries Are Dropping

As mentioned above, many manufacturers (especially on the Chinese market) are using lead-acid batteries because of their low price. The cost of batteries is usually expressed in terms of USD per kilowatt-hour (kWh), so let’s make a comparison.

In 2013, estimates showed that lead-acid batteries cost just $35/kWh, NiMH cost around $350/kWh, and lithium-ion go up to $700/kWh. Therefore, lithium-ion batteries were the least cost-effective option of the three as they were 20 times more expensive than the lead-acid type. See the full infographic of ebike stats & facts below: 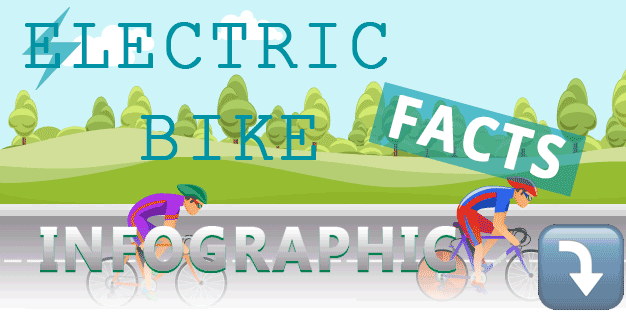 If you want to use this infographic, please contact us for full size and permission.