What’s interesting about Orbea is that they didn’t start as a bike-building enterprise. The company traces its roots back to 1840, when it was one of Spain’s most successful weapon manufacturers. After the First World War, gunsmithing was no longer as profitable as it once was. It was then that the folks at Orbea realized that they had to change their business, but to what? After all, they spent decades making guns with their metal tubing machines.

Back then, Orbea was just a family-owned business. From 1930 onwards, they started making bicycles using their hard-earned expertise in metallurgy. It was not until 1969 when Orbea merged with Mondragón Group, the world’s largest co-op of the time, to expand in size and influence.

Over the next few years, Orbea’s bicycle-making business continued to thrive. Until now, this company remains one of the frontrunners in bicycle design, research, and technology.

Besides traditional bikes, Orbea also released a line of road e-bikes, mountain e-bikes, and urban e-bikes. The urban e-bikes, also known as the Orbea Gain family, will be the main focus of this article.

The Orbea Bikes was founded in 1930 and was a family-owned business, but the brand Orbea itself was founded earlier as a weapon manufacturer.

Orbea Gain e-bikes are made for the smooth, paved roads of the cities. The frames of Gain OMR Carbon are built from carbon fiber alloy, while that of Gain Hydro are made of hydroformed aluminum. As a result, Orbea e-bikes are lightweight, durable, and comfortable to ride on. In terms of performance, these road e-bikes run efficiently, thanks to their top-class components.

Unlike other companies that only have a few e-bikes for you to choose from, Orbea has a total of 13 road e-bikes in their Gain family alone!

That means you have more options to choose from and a higher chance of finding the perfect e-bike for your everyday needs.

What We Like and Dislike About Orbea Gain E-Bikes

The Orbea Bike’s Gain e-bikes are lightweight and durable thanks to the carbon steel and aluminum alloy frames.

Orbea has been around the bicycle-making business for a long time, so there’s no question that their bikes are some of the best in the entire world. However, the Orbea Gain e-bikes are relatively new compared to their traditional counterparts, so we highlighted the good and the bad points of this family of road e-bikes. 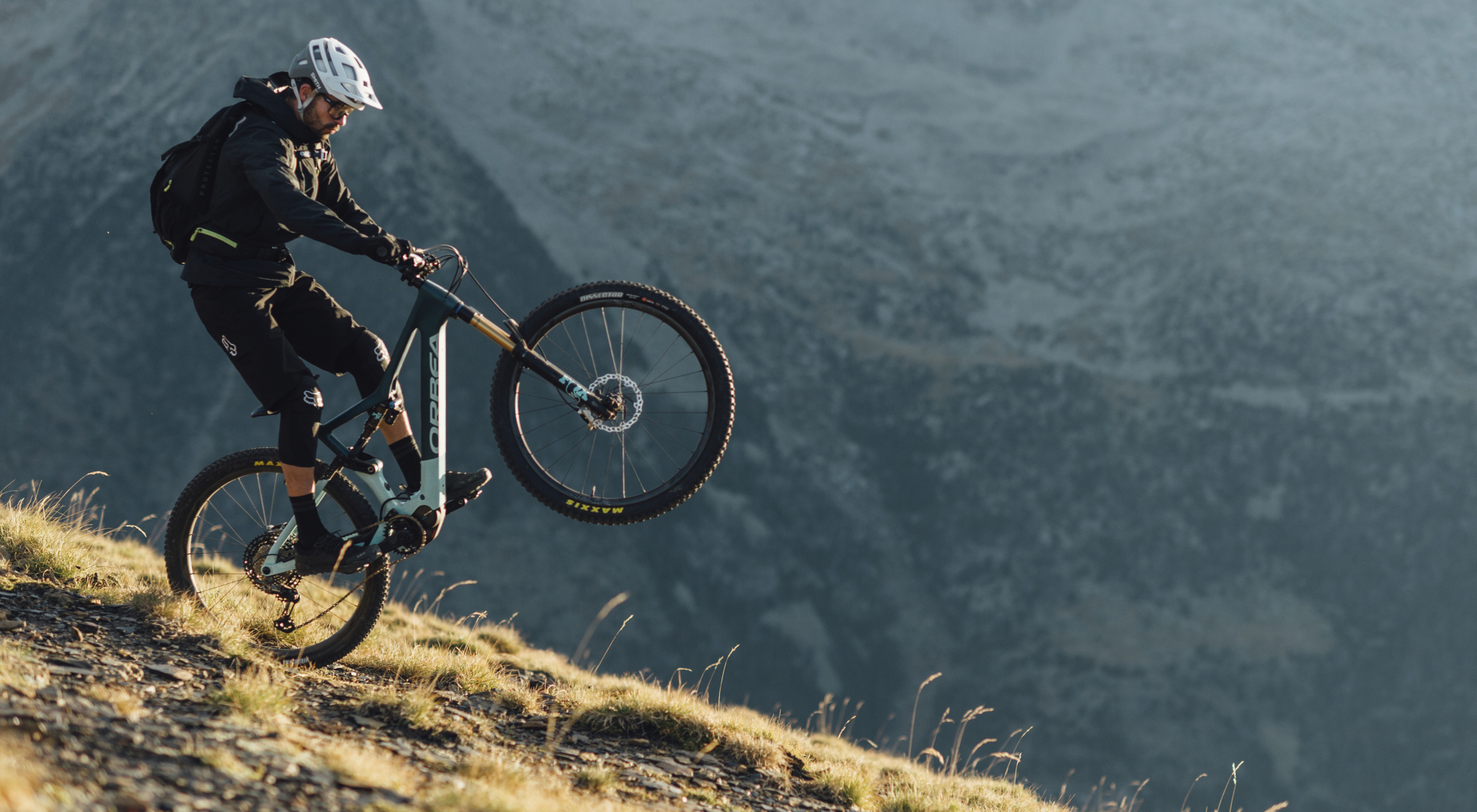 Although the Orbea Bikes have only two e-bike models, there’s no telling when they’ll release new high-quality e-bikes on the bike market.

Being in the scene for almost two centuries, Orbea has built an empire of bicycles on their shoulders.

Optimizing models every year rather than mass-producing hundreds of variants keeps Orbea’s bikes at their best. That being said though, they only have two models available for e-bikes: Gain D50, Gain M20 1X.

There are thirteen Orbea Gain e-bike models for you to choose from. The prices range from $2,999 to $9,999. To help you narrow down the best options, we picked five of the best Orbea Gain models:

The Orbea Bikes Gain e-bikes are classified Class 1 bikes and are equipped with the powerful Ebikemotion X35.

Orbea Gain e-bikes fall under Class 1 because they have a maximum speed of 20 mph. They all use the iconic Ebikemotion X35 Plus 250W mid-drive motor to generate 40 Nm of torque to power the bike across pavement and gravel. It even uses a smart system to automatically deliver the right level of pedal-assist during your rides.

One unique thing about the Gain e-bike motor is that it’s mounted on the wheel axle and not the bottom bracket. This means you’ll experience less resistance while pedaling the e-bike when pedal assist mode is disabled.

The 36V 250Wh X35 internal battery is also one of the best components of the Orbea Gain e-bikes. It’s not only lightweight but also compact enough that you’ll barely notice that it’s mounted on the e-bike. The lack of a bulky, removable battery on the Orbea Gain e-bike is a major factor in its sleek appearance and balanced weight distribution.

The Orbea Gain e-bikes emphasize optimal energy consumption, but there are times when you just need that extra battery power for an extended joyride. That’s why Orbea gives you the option to use the Range Extender, a unique external charger that other e-bikes don’t have.

The Range Extender not only charges the Gain’s X35 battery but also gives an additional 208Wh power. If you do the math, the total battery capacity increases to around 450W—that’s a 70 percent boost—which means more mileage for you!

Orbea also has an internal cabling system, where all the necessary wires that operate the mechanical and electrical systems of these e-bikes are hidden from plain sight. In other words, the wires make little noise and are less prone to getting damaged.

What if you care less about looks and more about performance? Well, if a road e-bike is what you need for your daily commute, the Orbea Gain is a wise choice for several reasons.

One, its Ebikemotion X35 system makes efficient use of the motor and battery to conserve energy. Two, the Range Extender delivers a huge boost to the battery life, which is perfect for multiple trips in the city. And finally, the integrated lights enable you to travel safely in the dark!

Although Orbea is known to have phenomenal frames, their performance is on par with leading brands—and then some.

If you’ve ever seen a professional bike race, you’ll find an Orbea bike, logo, and rider somewhere there. The fact that Orbea is a professional-level competitor speaks for performance by itself.

Orbea is not one to shy away from innovating on performance and making their bikes fun to ride. Whether you’re looking for a quick ride, something for the city, or a bit of a semi-off road vehicle, Orbea Gain has something for you.

Although the Orbea Bikes Gain e-bikes are new, the bikes still gained a lot of positive reviews and feedbacks from their customers.

It’s easy to buy Orbea Gain e-bikes on their website. You can even compare up to three e-bikes side by side to gauge their qualities better. This feature does not just work for the Gain family but for all the bikes sold by Orbea! And if you’re still confused about the process, the company is nice enough to provide a shopping guide on their website. You can also find your nearest Orbea authorized dealer if the Gain e-bike you want is not available on their official website.

Some might say the customer is always. Nonetheless, their feedback matters a lot. Based on most reviews, the response toward the Orbea Gain e-bikes is mostly positive! Customers loved the customization, appearance, and energy efficiency of the components. The price of some Gain e-bikes may be higher than the average Class 1 road e-bike, but there are so many models to choose from that users are bound to find the one that best fits their budget.

You can get a limited warranty for your Orbea Gain e-bike provided that you register online not later than 30 days after your purchase. There are many conditions to take note of, all of which can be found on their warranty page.

Check out their extensive list of manuals for instructions on how to assemble, maintain, and accessorize your Gain e-bike. If you have any questions that aren’t covered by the FAQ page, just give their Customer Service a call, and you can expect a response in no time.

It’s better to have all your inquiries answered sooner than later, so we provided a list of frequently asked questions that most of you might be thinking of.

Orbea Gain e-bikes are designed and assembled in Mallabia, Spain. However, some models are manufactured in Portugal, and the framesets are made in China.

Register for an Orbea account on their page. You will then receive an email for the warranty registration process. Enter the 11-digit registration number of your e-bike, located on the lower section of the downtube. Then there will be a few questions you need to answer before the registration process is complete.

Orbea Gain e-bikes are built to reach a top speed of 20 mph with no throttle. Therefore, they are considered Class 1 e-bikes.

Yes. Getting an Orbea Gain e-bike is worth it because you’ll end up with an energy-efficient, low-maintenance road e-bike with good mileage. The cheapest one costs $2,999, while the most expensive one is priced at $9,999. Compare the different Gain e-bikes on their website so you can determine which one fits your needs and budget.

Bottom Point — Who Are Orbea Gain E-Bikes For?

The Orbea Bikes Gain e-bikes are designed and built for concrete and gravel roads for a fun ride around the city.

Orbea Gain e-bikes are specially designed for concrete and gravel roads. Although they have a suspension system and 27.5-inch tires, they’re not the best e-bikes for off-road travel.

So if you’re looking for a mid-range road e-bike that offers a fantastic balance of comfort, durability, and efficiency, then the Orbea Gain is worth becoming your travel companion.

Be the first to review “Orbea Gain Review” Cancel reply

The Orbea company didn’t start as a bike manufacturer during its founding. It was one of the largest weapon manufacturers of spain back in the 1800s, after the first world war ended their weapon manufacturing business came to a halt and so Orbea Bikes was born.