Being an outdoors person myself, I personally love feeling the morning wind pass through me on my way to work. Thankfully, I don’t live in the most polluted place in the world, so I used to drive my usual commute with the windows down when I could.

This, of course, was not a lasting solution when I find myself in traffic. The solution? Getting an e-bike.

The Ride1UP 700 Series is the perfect electric bike for performance and value at one of the most competitive prices on the market right now. It’s powerful, lasts me more than enough, charges quickly, and takes me where I want to go without being a sweaty mess.

Don’t get me started on Ride1UP as a company.

Being a customer and on the receiving end of one of their products is angelic, to say the least. Ride1UP offers a stellar customer service experience, one that gets to you quickly, takes leaps and bounds to solve your problem, and makes sure that your problems are solved the moment you put down the phone.

Enough of all that hype. We’ll get through all of this in detail down below.

For now, here are the basic specifications of this e-bike: 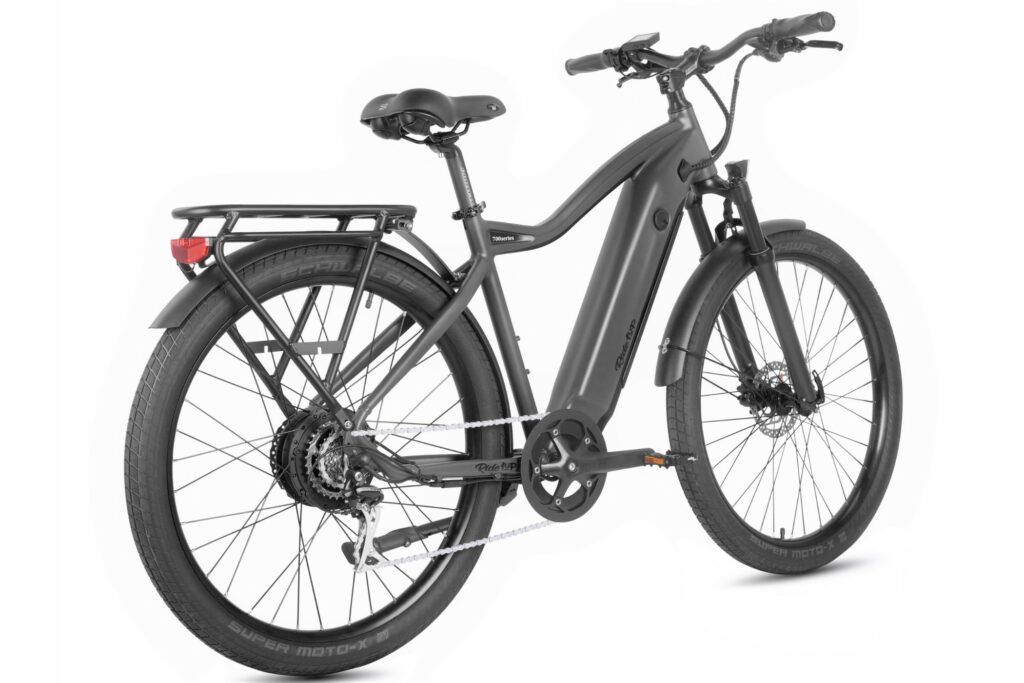 Ride1UP gives its customers the beautiful option of choosing between two frame variants—the ST and XR. Both are identical in most areas, except that:

A good rule of thumb you can use to angle the differences is that the ST looks like a moped and leans more on casual riding.

The angled handlebars feel a bit more relaxing, the missing top tube makes it easier for riders to hop onto the bike without having to raise their legs up and over. Additionally, women who prefer wearing skirts can have theirs dangle right over, without the top tube raising them up.

Foolproof if you’re the type who’s torn a few pairs of pants trying to get on a bike.

On the other hand, the XR looks like a traditional mountain bike and is the perfect frame for those that prefer a more leaned-in position.

All in all, Ride1UP captured the aesthetic of simplicity and finesse with their 700 Series.

Riders get to choose between those two models and furthermore have the option of Gunmetal Gray and Steel for their color choice. The frames themselves are made from lightweight materials, ensuring that any literal on-hand experiences with the 700 Series won’t require a powerlifter to manage. 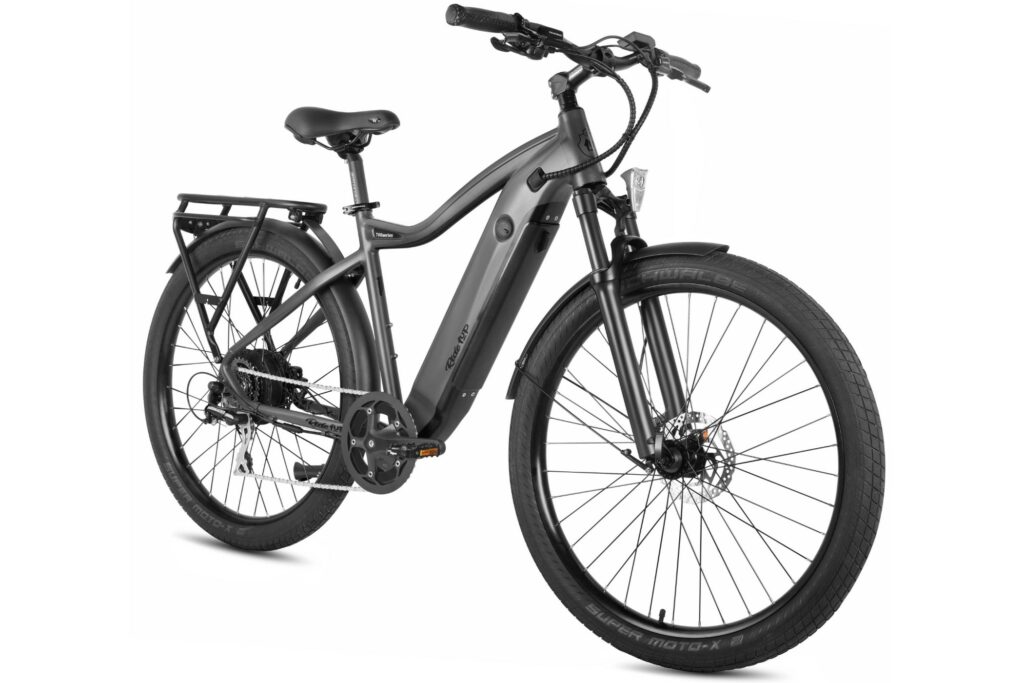 Moving on to the motor and battery, or as we like to say, where the magic happens.

Aspiring owners of the 700 Series are looking at a powerful 750W motor that packs up to 60nm of torque. For those of you that don’t speak physics, it’s enough power to classify the 700 Series as a Class 3 e-bike, easily.

The acceleration of the 700 Series feels amazing, to say the least. Coupled with the fact that the design leaves a minimal feel to the eyes, getting hit with a peak 1000W of power from the motor alone will leave you looking for a seatbelt on this bike.

Now let’s focus on the battery. Riders are equipped with a battery that can last between 30 to 50 miles. The battery is a 48V 14ah Reention Rhino, with 52 Samsung 35E cells and a Smart BMS. In short, it’s strong and lasts long.

When it comes to putting a little extra money on the table, the 14ah battery pack is the largest available size for the 700 Series.

Now, unlike the previous model before this, the 700 Series gets up to 27 and 28mph quickly. This is particularly important on longer roads and highways, where keeping up with the traffic is essential. 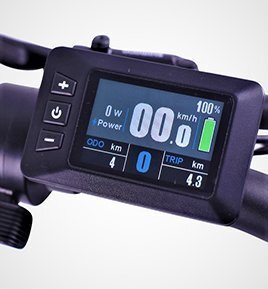 For the gentlemen and women that appreciate the finer details, here’s a rundown of all the smaller yet important components of Ride1UP’s 700 Series.

Say goodbye to finding a wall to lean your bike on! The 700 Series comes with a heavy-duty kickstand, so your bike can park anywhere. As an added feature for safety, the e-bike comes with a key for the battery system. Two, for those of you that sleep better with an extra key.

Our review of Ride1UP Core 5

The LCD TFT display has 2.2-inches of full-color screen real estate, showing the 0-9 levels of PAS and other advanced metrics. A step up in safety and added respect on the road, the 700 Series comes with an integrated LED headlight and a taillight.

Here are a couple of other useful components that the 700 Series ships with:

This, along with several other specific details, puts the 700 Series on a pedestal against most e-bikes at this price. It’s clear to see that Ride1UP spared no expense putting in as much value on their e-bikes as possible, for an affordable and competitive price. 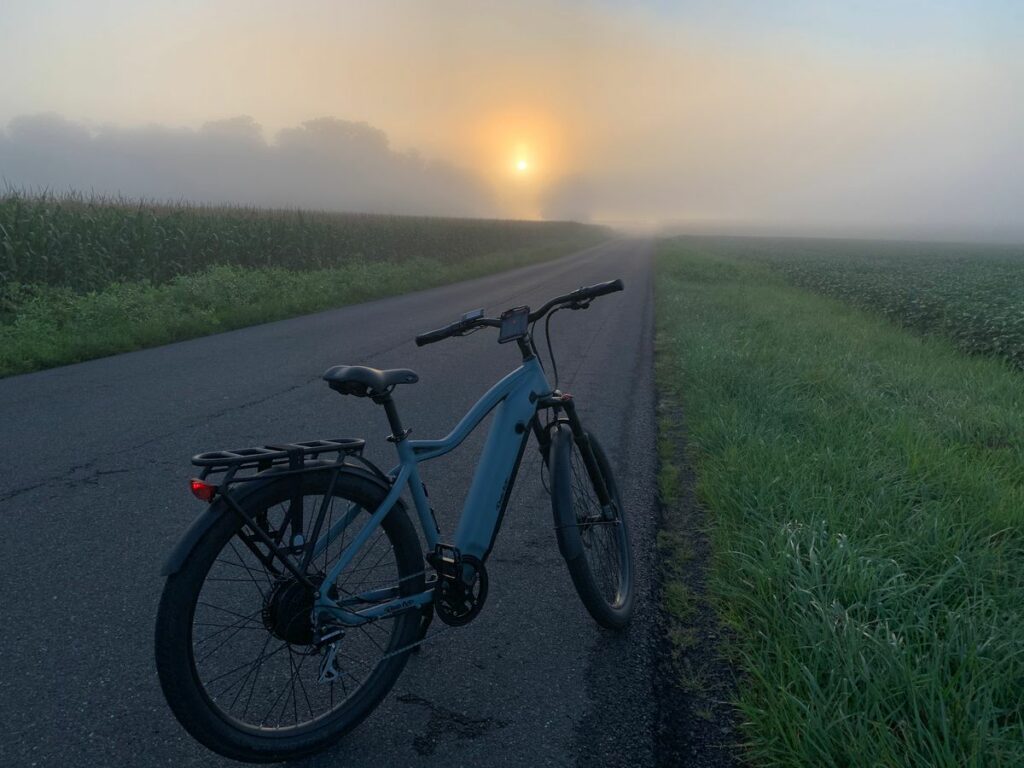 The 700 Series is the perfect definition of pure class. It’s an affordable bike, yet it delivers on promises in performance and reliability without a doubt.

Unlike other e-bikes on the market that prioritize aesthetics or profit, Ride1UP is a company built on the backbone of a founder that fixed bicycles for a living.

Ride1UP takes the cake for being a likable company but brings the party home for blowing away the competition.

Minimalist and simple—the aesthetic of the 700 Series doesn’t demand attention, but you’ll find yourself looking in that direction anyway. The beast performs just as well on e-bikes that are sold for almost twice this price, which is something most beginners and veterans will not expect from the simplistic design. 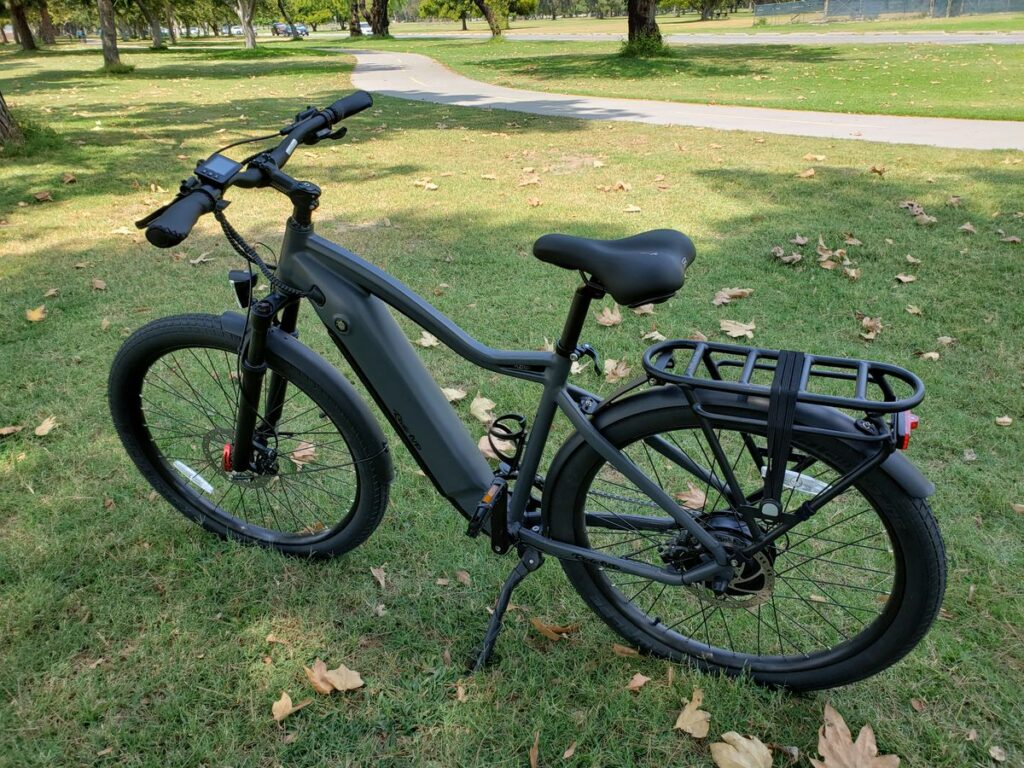 The Ride1UP 700 Series is straightforward and simple to assemble

Like most, if not all, Ride1UP e-bikes, the 700 Series does not come assembled to your home. It arrives in a rather large rectangular box, pre-assembled about 70 percent complete.

However, don’t let that change your mind. Dale Lovstad and his wife are both 80 and 81 years old, yet they managed to assemble the bike on their own. Ride1UP offers a thorough assembly video on their YouTube channel, for those that need a visual reference.

Otherwise, feel free to contact their customer support team. Ride1UP has a great reputation when it comes to customer service, so they shouldn’t let you down with any inquiries.

Unfortunately, Ride1UP’s 700 Series e-bike does not offer an upgrade for its batteries. The 14ah battery pack is the largest available battery pack that will fit this frame.

No. Ride1UP’s 700 Series e-bikes are not waterproof, but they are IP-65 water-resistant. This is the same level of resistance as most outdoor security cameras, so you should be fine from a little splash of rain.

Ride1UP only ships within North America, Mexico, and Canada. The shipping fee for customers around the Continental United States is free, but customers from Hawaii and Alaska can get up to $190 in fees. Mexico and Canada have it better, only paying an extra $100 in shipping fees.

Ride1UP’s 700 Series bike advertises 28mph, but most articles and blog posts do mention 27mph being the upper limit more often than 28mph. In terms of it being realistically attainable, it shouldn’t be a problem on flat roads and perfect terrain.

On Ride1UP’s website alone, the 700 Series has over 300 customer reviews and an overwhelming number of 5-star testimonials. When it comes to the sizing, however, it’s a one-size-fits-all. Thankfully, that one size fits a lot of people.

Ride1UP 700 Series is a one-size-fits-all

Here’s a detailed image of all the measurements in the 700 Series frame. This should give you a good idea as to whether or not the 700 Series is going to be something you can fit on.

Definitely a Ride. The 700 Series brings a lot of value to the table and at two-thirds the price point of most e-bikes that offer the same amount of firepower. It’s got keys for safety, a 28mph top speed, and a battery that can last you up to 50 miles, or more, according to some user reviews.

Be the first to review “Ride1UP 700 Series Review” Cancel reply

Ride1UP’s 700 Series E-Bikes offer stellar performance whilst being affordable. Here’s a quick summary of all the impressive features that this affordable e-bike has to offer.